It was a high scoring game last night with the Storm coming out on top 24 to 17 over the Rebels and two well picked CN Express players. The Storm built up an impressive 20 to 7 lead over the Rebels but they did not give up and with the power of 3 home runs, which includes one by each of the CN Express players managed to get themselves right back in the game. Goes to show you that no lead is safe in this league especially against a good hitting team like the Rebels.
at 11:15 AM No comments:

Even without the leagues MVP in the lineup, the Storm beat CN Express 13 to 6 in the Storms best defensive game of the year. It was the first game all year that no Awards were given out for any excellent or outstanding plays on the field. The storm came out of the blocks fast in this one, scoring 7 runs in the first. Al had 2 K's on his way to earn the 17th victory of the year for the Storm.
at 8:14 AM No comments:

Devils double up Storm 10 to 5

It wasn't a pretty display of hitting by the Storm last night as they managed only a few hits here and there. Al's 3 run home run in the sixth was the only hit that made this game respectable. It was the first game in over seven years that the Storm played with less than nine Storm players in a game. The Storm called up Junior from the Falcons and Wayne from Greenthumb to help out, as we had 8 signouts for this game. Both played well and the Storm team thanks them for coming out. Payback against the Devils will take place on August 9th.
at 7:39 AM No comments:

A nine run 3rd for the Storm was the difference in this game. It was a well played game on both sides with very few errors. Matt had a three run home run to cap a very good third inning. The Falcons had 4 three run innings but just couldn't get enough runs back in the end, and came up short. Make the final Storm 16 and Falcons 12. The season series is now in the Storms favor with a 2 to 1 advantage. Circle Aug 30th. on your calendar as it is the next time these two teams play, should be a good one.
at 8:22 AM No comments:

POS makes it to the Semi's

POS had a good tournament until they meet a very good hitting team in the Semi finals. In the round robin games POS destroyed their opponents 21 to 7 in the first game, 30 to 2 in the second game, and 15 to 2 in the third game. On Sunday morning in the quarter finals the played "Team Chris" and won 17 to 4. However in the Semi's they fell to the Red Hawks 21 to 9. All in all it was a good weekend and another good result.

The Storm with the help of 10 doubles beat the Attractions in a time shortened game. The Attractions starting pitcher George stymied the Storm batters for the first 3 innings, then the bats came alive with 3 runs in the fourth, 6 in the fifth, and then 9 in the sixth which turned out to be the difference.
at 7:54 AM No comments:

Article about Joey in the Toronto Star 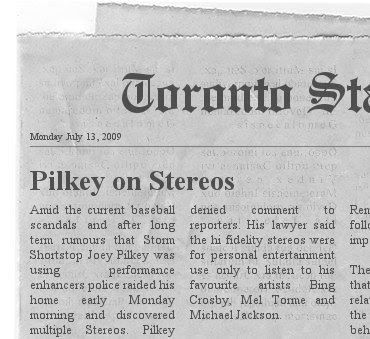 This article courtesy of Mike Murphy of the Falcons who has too much time on his hands. But we felt it was important for all to see what Joey has been up to.
at 4:54 PM 1 comment:

Email ThisBlogThis!Share to TwitterShare to FacebookShare to Pinterest
Labels: Fun

One big inning by the Storm was the difference last night. In the top of the third the Storm scored 12 runs before Direct Elevator was able to record an out. There were a few well played defensive plays that helped keep Direct Elevator to only six runs.
at 6:02 AM No comments:

With a few timely home runs the Storm powered past a depleted Greenthumb team. It was a fairly low scoring game in which Greenthumb just couldn't get the hits in succession. The Storm played a very consistent game with one less than steller inning. However it's another win and the runs against were kept to single digits, so all in all it was a good result.
at 7:55 AM No comments:

Storm come up one run short against Falcons

It was a not so classic game against the Falcons last night for the Storm. But it was the seventh time in their last eight meetings that there was a one or two run difference. The Falcons came out hitting everything hard, they found themselves with a 16 to 4 lead after four innings. Que the comeback for the Storm 4 runs in the 5th, 3 in the 6th, and 5 more in the 7th but with time becoming a factor they just couldn't get one more run. Make the final Falcons 17 - Storm 16.
at 7:20 AM No comments:

It was another typical game between Coulas and the Storm, get a few runs give up a few runs, get a few more, give back some more runs. This time the Storm came out on top. One thing for sure it's better to win this type game than lose it. Tomorrow it's the Falcon's, hopefully it will be a better defensive game.
at 11:00 PM No comments:

Our June 17th rain-out game against Greenthumb has been rescheduled for Friday August 21st at 8pm. We already have a game at 9:30pm vs CN Express.
at 8:07 AM No comments:

Email ThisBlogThis!Share to TwitterShare to FacebookShare to Pinterest
Labels: General

The stage was set for classic battle between the two division leaders, only it didn't turn out that way. With 7 home runs, 1 triple, 6 doubles and 25 singles the Storm hit there way to a convincing victory over division leading Hanet Plastics. The 39 hit assault elevated the Storm into 1st place in the league standings.
at 7:57 AM No comments:

It took 4 innings but the Storm finally managed to get a hit off a very stingy St Louis Mayhem pitching staff. The Storm defense was also very good for the first 5 innings as Mayhem never got past 3rd base with only a few hits here and there. Al and Mike Tyl were pitching quite well. The Storm scored 4 in the 4th and 6 in the 5th thanks to a three run bomb by Al. So going into the top of the 6th it was 10 to nothing. All that changed with a few defensive gaff's and a couple of well placed hits. The 7th wasn't much better, thankfully the Storm held Mayhem to only 3 runs. The last couple of innings weren't pretty but in the end, it is a victory for the Storm, make the final 10 - 8.
at 10:40 AM No comments: