It almost seemed as if it had been planned this way. The number one and two teams met in the championship game. Although that might have been part of the script, the way they each got there was certainly not exactly scripted.

Storm had played through two tough teams to get there that day. The A’s had just had a scare from the Expos who shocked the league by moving into the quarter finals and proving that you can be a horse’s ass and still find success.

But none of that mattered anymore. The past was in the past. The present was the game between the  A’s, the official first place team in the league, and Storm, the team that finished first in the weekly power rankings, which we all know is the only place that matters.

Things didn’t start well for Storm, though. They managed to score only one run in the top of the first (a selfish solo that in the grand scheme of things might have turned out okay). Storm’s batters seemed to have been surprised they were up already as they had been the home team in every game thus far, and clearly needed some time to warm up. The A’s did not seem to need any time to warm up. They scored the max six in the bottom of the first.

This is a time when many teams would start to get frustrated and down on each other. But Storm knew that they had scored more than six runs in every game this season, and it was far from over. The second inning saw a slight change in fortunes. Storm scored three and held the A’s to a goose egg. They still trailed 6-4, though. In the top of the 3rd they were blanked and the A’s added an additional run to increase their lead to 7-4.

The turning point of the game came in the bottom of the fourth. With the bases loaded, Kuasimodo Kraig stepped up to the plate. Trying to shaKe off memories of his previous plate appearance, where he swung and missed so hard at two KonseKutive pitches and strucK out, he now had to pull a Taylor Swift and ShaKe it off. And shake it off he did as he launched a game changing grand slam high into the sky and well over the centre field fence. Storm now had the lead.

But the lead didn’t last long in this carousel of a game. The A’s scored two more to sneak into the lead once again. In the top of the 5th, the floodgates opened as the Storm poured on five runs. Joey hit a three run blast and Bob tripled. The A’s would try valiantly to come back, but they only put up three and the score was 13-12 at the end of the 5th.

Storm scored one in the top of the sixth, and the A’;s put up a deuce. That meant that with one inning to go, the game was tied. Both teams were starting at the top of their respective orders so it meant that the game would be decided by the best hitters on each team. Who would come out on top? (please forget that the headline spoils all the suspense!)

Duran single handedly took the game into his hands by hitting his second solo home run of the night. While Chewbacca trills could be heard emanating from Storms’ dugouts, this run could end up being important, and Storm had homers to hit. Rene showed the steel in his veins he has developed as a firefighter, and took a walk. Joey singled, and Angry Al showed up to help his own cause. He mashed a two run home run that put Storm up three. But would three be enough? Bob doubled and Kevin got a key single driving Bob home. Storm now had a four run lead. But the A’s have power and had two home runs to hit. Would they use them wisely?

After a leadoff single, Storm recorded two quick outs. There was some discussion of whether or not they should walk Lou, but with a four run lead and the A’s having two home runs to hit, they decided to pitch to him. Lou hit the expected two run homer to cut the lead in half, but that meant the A’s still needed two more runs with one home run left. That’s when Al made the pitch of the game. He served one up to Travis, knowing Travis has trouble keeping it in the park. Travis blasted a long home run pulling the A’s to within one, but also using up their final home run with another home run hitter on deck. Carlo popped up and Count Chocula called the ball so loudly he could be heard in Transylvania. He caught it,  and Storm were the champions! 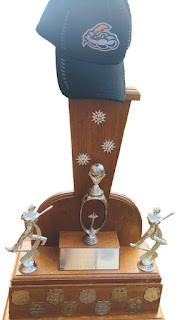 Unlike the game against Broadway, it was Storm’s offence that was flying high. Storm started off well  in the first, sending six batters to the plate and scoring six runs. This was accomplished by two home runs being hit. While Storm slacked off a little in the second and required more than six batters to achieve the feat, they still scored six runs again. Jumping out to a 12-3 lead gave Storm lots of breathing room and took a lot of the pressure off, so Storm sailed to an 18-11 victory.

Bob seemed to be single handedly trying to elevate Storm over Falcons as he hit two massive home runs driving in five runs.

This game may or may not get any love on Stormwatch as it led directly into the championship game. You’ll have to tune in to see.

Slopitch is normally seen as an offensive sport, but sometimes it can be won with the glove not the bat. That was primarily the case in the quarterfinal matchup between Storm and Broadway.

Storm’s defence stood strong against a tough Broadway lineup. Duran set the tone in the first, covering a lot of ground and making a fantastic catch in deep left field. As if the outfielders were trying to one up each other, Bob made a fantastic sliding catch. He slid to the exact spot the ball would come down and waited for it to fall into his glove! Duran made a second fantastic catch diving for a ball that had many of the Storm players having flashbacks to a similar play that Craig made earlier in the season that put him on the IL for two months and earned him his nickname. And Greg topped them all by catching a ball that was over the fence that would have given Broadway the lead. He held it up high, the green ball looking like a scoop of mint chip ice cream.

Storm did put together some timely offence. Mills made an aggressive head first slide into second. It wasn’t until the 6th that the bats really started to sing as Storm exploded for sixth capped off by a three run double.

For more on the game and a special interview with Greg the ice cream man, please listen to Stormwatch. Your podcast for all things Storm!

Storm storms back against Coulas

The second game started similarly to the first. Coulas scored four, one more than Storm had given up in the first inning of the first game, but Storm’s result was shockingly similar. They scored six capped off by a three run blast by Quasimodo.
Storm struggled to score through the fourth inning except for a home run by Rene and Storm went into the fifth trailing 10-9. Coulas changed pitchers, though, which changed Storm’s fortunes. Joey and Lance both hit two run blasts and it looked like Storm was going to have a massive rally. Kevin singled. Storm then put Duran in to run for him. Brad hit a short fly ball to right field. It looked like it was going to drop in and Duran broke to second. The ball was caught, and he turned and ran back to first but was doubled off essentially killing the rally.
It didn’t matter, though. Storm would hold on to a very tightly contested 14-12 game. Storm plays Sunday morning in the quarterfinals.
Listen to the podcast for more fun and an interview with the cycle man himself. Big Daddy D.
Check out the Podcast of the game as reported by;

Storm started strong in their first game of round robin play against the Expos. The game started close. The Expos showed some power and scored three in the top of the first. Storm stormed back and scored six of their own. Brad showed some strategic thinking by getting out so Craig could knock a three run home run to reach the max six without wasting any runs.

Storm scored five more in the second to take a solid 11-4 lead. Batting Practice Thomas thought it would be hard for the other team to hit home runs off him if he just walked everyone, so he walked the first two Expos batters. They both came around to score, but once he started trusting the defence and letting the Expos hit the damage was kept to a minimum.

Quasimodo and Tank Engine went back to back with home runs to start the third for Storm. Of course, that meant that Tank Engine’s home run was a selfish solo. Storm cruised through the final four innings to win the game. The score got pretty lopsided, so Quasimodo took pity on the Expos and hit a home run out, and Brad decided to get really generous with a ground ball out that he allowed them to turn into an inning ending double play.

Cycle Watch: Duran, who seeks out cycles more than any other player in the league, accomplished something even less common than the cycle. He hit a natural cycle. He hit a single in his first at bat, a double in his second at bat, a triple in his third at bat, and a home run in his fourth at bat. Tank Engine missed the triple or Storm would have had two cycles in the same game. Quasimodo got a triple, but everything else he hit was a home run or home run out. He had too much power to hit a measly single or even a double.

Listen to Stormwatch for a more thorough retelling of the events, along with the first in game interview