Sad ending to a great season

As in past years, specifically the last two years, the Storm once again fall to Xtreme in the playoff's. Xtreme started out really strong putting up 17 runs after only 3 innings. The Storm could not answer, as most of the bats were silent for this game.

Off to the Semi's

With the way the re-seeding went we played Direct Elevator again, fortunately for us we also had the same result, thanks in large part to a 7 run first inning offensive outburst. In the third inning Duran hit a grand-slam HR that gave the Storm a commanding lead. However in the 5th inning Direct answered back with 4 runs, but the Storm were able to keep Direct off the score board for the remainder of the game. 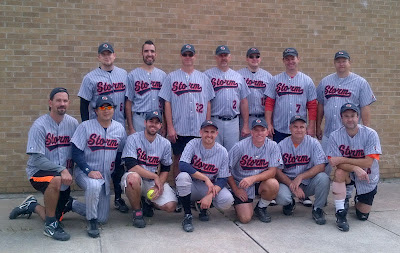 The Storm had a 4 run lead after 1 inning and never looked back, this game was kept close throughout but the Storm always seemed to have an answer for Directs offence.

The Storm and Mayhem played a close game for  4 innings, but in the bottom of the 5th inning Al belted a Grand-slam HR to break this one open and in the end the Storm defeated Mayhem 14 to 7.
at 7:52 AM No comments:

All league games are now complete. The Storm will play Mayhem first at 10:30am on Saturday September 15th. Next up will be Direct Elevator at 1:30pm Saturaday afternoon, both games will be played on K2. Depending on what happens in those games our next game would be either Saturday at 4pm, or 5:30pm or Sunday at 10am or 11:30am. We won't know that until after the round robin games are complete on Saturday. 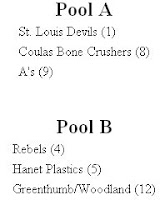 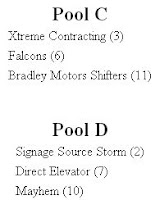 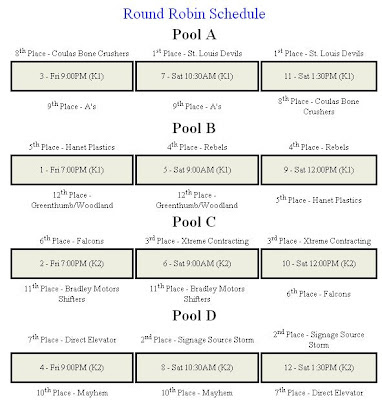 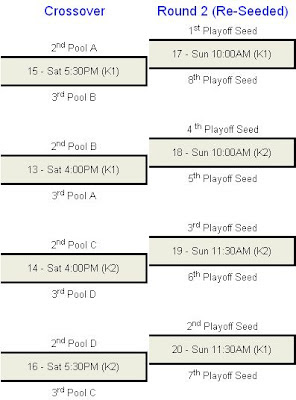 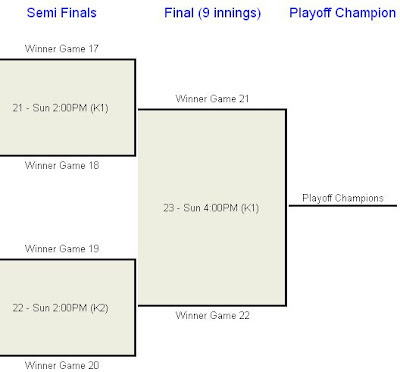 The bats were out in force last night racking up 25 runs. It was a solid end to a great year. The Storm ended up with 28 wins and only 8 losses, plus 2 ties. Good enough for a 2 place finish overall and first in the Vice Presidents Division.

Close game results in a tie

Good game last night, but the Storm could not hold onto the lead they built. Coulas scored 5 runs in the 6th inning to tie the game, and each team scored one in the 7th to keep it tied, Bob had the Storm's only HR and it was an inside the park one. Coulas belted out 4HR's, thankfully only two counted. Make the final 12 to 12.
at 7:37 AM No comments:

The 2012 SPN Provincials (Masters 35+) were in Niagara Falls on Labour Day Weekend and POS qualified for the tournament by playing in the Scarborough and Oshawa tournaments.  Game 1 was a Friday afternoon game at 2:30 against the Mushballers on JAP#2 diamond.  With gale force winds blowing in from left centre field and the outfield “concrete” grass (or I guess it should be called “brown stuff”) it made for an interesting game.  POS started off slow and found themselves down 10-5 heading into the top of the 7th when the bats came alive and racked up 6 runs to take the lead heading into the bottom of the 7th.  However, the Mushballers had some quick hits and after tying it up they had the bases loaded with no outs and won the game 12-11 with a single to left.

Game 2 was an early morning 9am match at the new Headquarters in Chippawa on diamond PC#5.  POS faced the Generals who had also lost their Friday game.  The game was close early on until the Generals had a big 6 run inning which POS could not answer and ended up losing this one 13-8.

Game 3 was also at HQ on PC#3 at 1:30 against Byng Boyz who were also 0-2.  This was a must win game for both teams if they wanted to guarantee the chance to play in Sunday’s elimination games.  The tournament had 18 teams with the top 16 teams advancing to Sunday.  POS started this game off strong scoring the mercy 6 runs in the top of the 1st and continuing to score runs and play solid defense to end up taking this one 17-0 after a 5-inning mercy.  Now, it was off to the arena to see who/when POS played on Sunday.  POS finished with a 1-2 (+1) record which was the best of the teams with the 1-2 record and placed them 11th to face the 6th place team on Sunday.

Game 4 was a bright and early 8:30am start back at JAP on diamond #1 this time.  POS was taking on the 6th place Town & Country A’s who they had faced last year on this same diamond in the Saturday round robin game.  Although the winds were calm the game was delayed a bit at the start due to the fog but once it lifted POS was looking for a better outcome then what they had against the A’s last year.  The game was low scoring early on but the A’s had some key hits and after putting up a 6 run mercy POS found themselves down 14-5 heading into the 7th and could not pull off a dramatic comeback this time.

POS had a great time over the weekend and will look to improve on their 10th place Provincials finish in 2013.  Click to see the 2012 SPN Final Standings .  Next up for POS is the Oshawa SPN tourney in October which will count towards the qualifying for the 2013 Provincials.