Great hitting, great pitching, and descent fielding lead the Storm to their 27th victory of the year. The Storm hit 7 doubles and 2 Home runs to power past Direct Elevator to hold onto top spot overall.
at 8:09 AM No comments:

Not a great result for the Storm last night. The Storm built up a 11 to 3 lead, but in the bottom of the sixth inning Bradley scored 9 unanswered runs to defeat the Storm 12 to 11. This game had the Storm belting out 6 HR's but because of the +2 rule, only 3 counted, we could have used Joey's grand-slam as it turns out.
at 8:09 AM No comments:

Solid at the plate

Last night was one of those nights where it seemed that every time a Storm player would come to the plate they were going to hit the ball hard and more often than not find a hole somewhere. The Storm hit 4 HR's even though only two counted, in the end the Storm belted out 19 singles, 4 doubles, 3 Triples, and 4 HR's for a total of 30 Hits on route to a 22 to 11 victory over Xtreme Contracting.
at 9:19 AM No comments:

For the 4th time in this 2012 season the Storm took both ends of a double header, this time thanks to 3 huge innings scoring 8 runs in the first and fourth innings, then adding 9 more in the 6th inning. This one was close for a while, but in the end the Storm defeated the A's 26 to 13.
at 9:49 AM No comments:

The Storm and Rebels played a typical game that seems to be the new normal when these two teams meet. A close game, with good defense and good pitching. The only difference in this game was a 5 run 5th inning for the Storm that the Rebels were unable to answer.

Last night had the Devils and Storm playing a good game for the first few innings, but in the top of the 4th inning the Devils hammered the Storm scoring 11 runs and taking a commanding 16 to 3 lead. But cue the comeback in the bottom of the 5th the Storm batted around twice scoring a whopping 15 runs to retake the lead 18 to 16. The sixth inning remained scoreless but in the seventh the Devils scored two more to tie the game at 18. So with last bats the Storm got their first two runners on base and Greg hit a screaming liner to the fence to walk off this victory for the Storm. Make the final Storm 19 and devils 18.
at 9:06 AM No comments:

Mike so close to a shutout

Mike was on the mark yesterday, the A's I think had a guy on Third twice and second twice, but it took them to the top of the seventh inning to finally push a run across the plate. The Storm managed to put up runs in every inning on way to a 16 to 1 victory.
at 8:26 AM No comments:

POS comes up short in Oshawa

POS headed into Oshawa to play their second qualifier for Niagara and looked very good on Saturday with timely offense and solid defense.  In their 3 round robin games they won all of them with only giving up a total of 5 runs with scores of 11-1, 8-3, and 14-1.  This 3-0 record with the +19 run differential (max 7 per game) had POS seeded #1 out of the 20 teams and ahead of the other 3-0 teams.

Sunday morning had POS taking on the Hot Toddy’s (no relation to Todd) who were the winners of the 8th vs 9th game and with them having just played they seemed ready from the start and put POS in a hole early and they never seemed to gain enough momentum to take the lead away.  Make the final 16-11.  All top 4 seeded teams from Saturday lost their quarterfinal game so something must have been in the air on Sunday morning.  A great time was had by all and next up for POS is Provincials in Niagara at the end of the month.

It was a typical game against Direct Elevator again last night. One team would take the lead the other team would come right back and take it away. It seems when these two teams play it will come down to the last out and that is exactly what happened last night. The Storm had a 3 run lead entering the bottom of the 7th. But Direct Elevator was able to push 3 runs across the plate before the Storm was able to record the final out. This one ends in a 19 to 19 draw.
at 9:03 AM No comments:

The Storm took the lead with a 12-run 1st and responded to a Falcon comeback attempt with an 8-run 5th.

With several players from both Greenthumb and the Storm away at a POS tournament, the Storm were still able to meet the minimum requirement to field a team.  Greenthumb could not, so the Storm came away with a default victory. Storm win 7 to 0 in the default.
at 11:51 AM No comments:

POS takes it all in Uxbridge

POS was looking to improve on their runner-up finish in Scarborough at the beginning of June and headed to Uxbridge to play in the 19th Annual NSA Diamond Duster Tournament.  Playing in the REC “E” Division POS started the tourney with a win on Friday night at the Arena against an Uxbridge team (Victorious Secrets) scoring 10 runs in the top of the 7th to put this game out of reach and take it 26-9.

Saturday at noon was on an interesting diamond (Goodwood#1) with trees, rock, road, and light standards in the OF where POS took on a team from Ajax (Killer Instincts) and again put this one out of reach in the top of the 7th scoring 7 runs to take this one 18-9.  The 4:40 game on Saturday was back at HQ against another local Uxbridge team (Rookies) where we should’ve been keeping track of K’s as Al must have K’d at least 7 Rookies in the game as POS took this one in convincing fashion 15-4.  The late game on Saturday was based on standings within Pod A and with 2 teams being tied 3-0 POS had the run differential advantage (+37) over The Replacements (+35) from Oshawa heading into the 1vs2 matchup to determine the winner of Pod A.  The 7:55 game at HQ was an exciting back and forth battle between POS and The Replacements which saw POS come out on top 16-13.  At the end of the Round Robin POS was 4-0 with a +40 which gave them the edge over another 4-0 team in Pod C (Silverbacks) who were +30.  This gave POS the #1 seed out of the 18 teams heading into Sunday’s elimination games.

Sunday’s 11:05 game at HQ had POS taking on the winner of the 16vs17 game who ended up being the Rookies again and having to play back-to-back games proved to be too much for the Rookies as POS took this one easily 15-3 after a 5 inning mercy. The 1:15 game back at the Arena saw POS taking on the #9 seed Team Sox from Oshawa and in a very close game POS hung on to take this one 9-7 stranding the tying run on 2nd in the bottom of the 7th.  The semi-final game, 4:30 at the Arena saw a return of the Killer Instincts who were seeded 12th but had knocked off the 5th and 4th seeds for the rematch against POS.  The rest between games for POS was nice to have but the bats also seemed to be continuing their rest into the game as POS found themselves down 7-2 heading into the top of the 7th.  With most of the POS players scheduled to play in the league games at 6:30 there were thoughts about making it back in time for those games…however, queue the comeback and with some timely hits POS rallied to score 5 runs to tie the game heading into the bottom of the 7th.  POS shutdown the Sox in the bottom of the 7th and headed to extra innings with Derek starting at 2nd base with the 1 out.  Jeremy singled to right and Derek scored easily for POS to take the lead by 1 run.  The bottom of the 8th saw the Sox runner at 2nd base make a running mistake on a grounder to Joey at SS which caused him to be tagged out and with 2 out they had another hit but ended the game with a flyout to Dave in RF.  POS was heading to the finals with the dramatic come from behind extra inning 8-7 win…and emails back to the teams in Whitby letting them know that they would not be back in time for those 6:30 games.  The 6:40 Finals at HQ had POS taking on The Dillos (#6 seed) from Scarborough who had knocked off the #3 seed (The Replacements) by a default in the quarters and the #2 seed (Silverbacks) 7-5 in their semis.  The Dillos were experiencing their first finals and as POS jumped out to an early lead it proved to be too much for The Dillos to mount a comeback as timely hits, great base running and defense by POS allowed them to take this one 13-4 and become the 2012 Diamond Duster REC E Champs going a perfect 8-0.  It was a great weekend had by all and POS is looking forward to the next tourney in August. 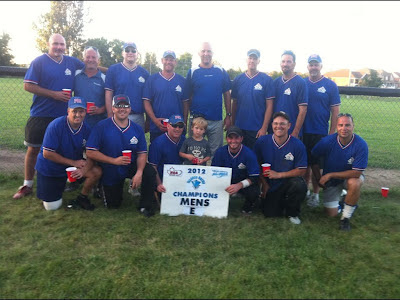