The Storm played the final regular season game last night against Hanet Plastic. The Storm knew that had to have a victory in this one to clinch the President's Division trophy as Xtreme defeated The Falcon's prior to the game. With a huge crowd of Xtreme and Falcon's players on the Hill in left cheering on Hanet for the victory, the game started with Hanet jumping out to a quick 3 run lead but thanks to a huge 9 run second inning by the Storm, this game was put to rest fairly early. After 3 innings the Storm had a pretty good hold of this game and the left field cheering section was much quieter and smaller than at the outset. Good solid hitting up and down the lineup and the defense matched the offence on this night, resulting in a championship. A few other notes from this game, Bob tried to kill Jeff with a line drive down the first base line that he couldn't get out of the way of. Joey went hit-less for the first time in 114 games dating back to August 2010. Bob won the Storm batting title(.762) and HR(21) title. 29 Victories for the Storm this year most ever, and we tied our winning percentage from last year at .763. Great Season everyone, now lets bring home the Playoff Championship as well this year. 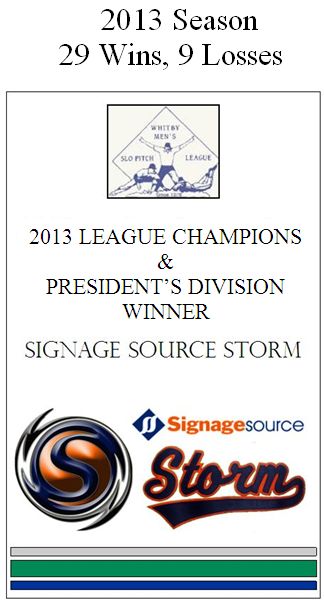 ﻿The SPO Provincials took place in London Aug.16-18 and POS entered the Masters 35E division with high hopes. Unfortunately things did not turn out as expected with POS ending the tourney going 0-3 with losses to The Mushballers 11-6 (Fri @ 4:45pm), the Mad Dogs 16-5 (Sat @ 10:15am), and Diamond Kings 17-6 (Sat @ 1:00pm) all on diamond #4 at the Southwest Complex. The group had a great time at the hotel with the pool so the weekend wasn’t all bad.


SPN Provincials were held in Niagara over the Labour Day long weekend (Aug.30-Sep.1) and POS was hoping for a better outcome in the Masters 35E division. Things did not start well for POS as they took on the Sultans Fri @ 2:30pm on PC#6 and were defeated 15-3 as well as losing Mark in the bottom of the first on a throw from RF to 3B which injured his arm and later was determined at the hospital as a tear in the elbow tendon. Game 2 had POS taking on Whisky John’s Bucs Sat @ 9:00am on PC#3 and the bats were alive in this one as POS evened their record at 1-1 with a 18-12 win. The final game of the round robin was at 12:00pm on PC#2 against the Knights and POS came back from an 11-5 deficit to take the win 16-13. After the round robin POS had a 2-1 (+2) record which had them tied for 2nd with the Town & Country A’s but the next tie-breaker (overall run differential) had the A’s at a -1 with POS at a -3 so that placed POS in 3rd place heading in Sunday’s quarterfinal matches. The 10:00am game on PC#6 was against the Chiefs who finished 2nd in the other division and unfortunately the POS bats were silent most of the game with some of the harder hits being caught by the Chiefs’ good defensive plays…in the end POS was no match for the Chiefs losing 12-1. On a positive note, this was the best finish by POS at the Provincials finishing 7th so they’ll be looking to improve on that in 2014! A couple of great weekends were had by all of the POS players and families.

POS Rosters for the Provinicals:

Mark Brown (not in WMSPL) (Niagara)

Only one more game left

It was an offensive explosion for Joey, going 3/3 with 2 homeruns and 7 RBI. The storm hit well top to bottom and played tight defence for most of the game. The A's made it very close in the bottom of the 7th seemingly finding every gap on the field. However the storm was rooted on by their own personal group of cheerleaders which helped motivate them to pull out the squeaker of a win.