After raining down runs against Greenthumb and Coulas on Saturday, Storm’s bats lost their thunder. Storm did not score in the first three innings, spotting the Falcons to a 9-0 lead. This should not have been insurmountable. Storm seemed to wake up in the 4th and scored five runs. Suddenly they were right back in the game. In the 6th, Brian led off with a triple. That’s right, a triple. This looked like a promising start. However, Brian must have used up all the gas in his tank, because two batters later he would be thrown out at home trying to score on a fly ball to right. Storm added a run in the 7th, but it wasn’t enough. Storm only scored in two out of seven innings. That’s not how you win in slo-pitch.

After winning the regular season for the 5th straight season, Storm fell short in the playoffs for the 2nd year in a row. There’s always next year.

Scoop's is warming up the electric typewriter.... It's old like scoops, and apparently takes quite a long time.

Scoops Jockovitch,your intrepid reporter here…Ah what does it matter.
After waking Sunday evening from a Iaaswca and Jagermeister fueled celebration for what I was sure was going to be another Storm Championship! I was dismayed to find out that they were done... Like Dinner and my first 3 marriages.
So these recaps are like writing about your favourite dog that you know has already been taken to the “farm” up north.

The Green Falange’s started off quickly with a double and 4 singles to make Jack, Chrissie and Janet very happy scoring a 3’s Company.
I love that episode where they had that misunderstanding!

Facing the Verté Digit the boys in orange needed to shake off their end of season slump.
Scoring ( just like my latest girlfriend) a 9 in the first! The street cones seemed to be off and running, well a fast jog really…I’ve seen most of them attempt running.
Highlighted by 9 hits and Joey visiting PEI and bringing back a tater!

In the second those guys who are really great with plants mirrored my dating history with alot of X’s and no scoring.
Whereas hurricane El Stormo blew another 5 runs across the plastic rectangle we call home highlighted by Mr.Spray and his Mr. Simpson.

Bottom of the third for our lads was very farm animal based. Durans Rooster sacrifice was starting to prove well worth it batting wise with one HR already.
However, as he stepped to the plate, the bases were loaded and it wasn’t a chicken that was needed but a horse and one of it’s shoes as Big D smoked a ball over the fence for the ever exciting... 3rd Out.
If only there was a way he could get this opportunity back you ask?

Since we’ve had farm animals its feels about time that we bring some baking into our little tall tale today.
We’ve all become accustomed to the pre dinner favourite The Left Field Greg Roll. It doesn’t appear on the menu as much as it used to but its quite fulfilling and enjoyable. Well, we have a new item on the menu as of this game and we call it the
Groskopf Stumble Tumble Crumple. This delectable treat had never been experienced before but will live on in memory. It consists of a ball being hit to right centre field, the fielder then stumbles as he catches the ball and yet somehow this causes him to tumble backwards in a crumpling somersault. You really must try it!

Off to the 4th for a 4 up 3 down scenario for the team named after the Jolly Green Giants favourite hitchhiking finger. While add on another 4 spot for those lovable, huggable Pylons!

The 5th brought the most underwhelming Star Wars movie to life for Greenthumb scoring a Solo HR and for Foghorn Leghorns biggest fan an opportunity for redemption.

This start all but guaranteed that the Storm would once again be returning as Champions on Sunday…right? RIGHT

Storm had another first place finish. Unlike last year, which came right down to the last game of the season, this one was wrapped up pretty early on. This could be bad for Storm as their last two games of the season were pretty pathetic. Sloppy defense and lackadaisical hitting was problematic. They’ll have to turn it around if they hope to be successful in the playoffs. While their season record is impressive (31-6-1), they lost twice each to the 2nd through 4th place teams (one of the losses to Broadway was in the mid-season tournament).

The theme of the season was defaults. Storm had five default victories, which helped with the record but hurt people trying to put up individual statistics.

As a team; Storm led the league in runs scored – 719 (tied with the A’s), and fewest runs against 415 (though this statistic as aided by the five forfeit victories).

The two new players were solid additions to the team. They both hit very well and played solid defense. As you can see below, their names appear all over the Storm leader boards. We’ll see if they are enough to help get Storm  win the playoff championship.

Storm struggled for the second game in a row. Instead of one really bad inning, Storm decided to go for two fairly bad innings, giving up seven runs in each of the first two innings. Jeff came into pitch in the 3rd and held the A’s to only two runs over the final four innings. His shut down strategy was based around serving up home run outs as the A’s were +2 after the 2nd inning.

Duran seems to have found his cock between games, because he made a couple of nice plays in the field. It was believed that Duran simply might have transferred his curse to Rene who missed a few balls, but Rene also made a few nice plays later in the game.

Storm did not produce much offense in the game scoring only five runs in the final six innings, including being shut out in the 5th and 7th.

In the previous game, Duran and Jeff both had multi-season consecutive game streaks come to the end. In this game, Brad had a consecutive season streak come to an end. Until 2019, Brad had hit at least one home run in each of his previous 17 seasons. But in 2019, he was unable to knock a dinger. In his final at bat the entire team was cheering for him. With the A’s  +2 in home runs, Storm had four home runs to play with, and Brad had the greenlight to hit a home run. He was also given the greenlight to keep running wherever he hit the ball. However, a line drive over second base fell in and Brad stopped at first.

After a long break thanks to the forfeit, Storm was pretty plastic against Hanet. Storm didn’t generate much offense in the game, and they had one really bad inning of defense. Calliope music abounded in the 2nd as Hanet scored 15 runs, most of which were unearned. Jeff was knocked flat on his ass by a ground ball. Mike had time to eat a doughnut and drink a coffee before a fly ball came down in his glove, and then dropped on the ground. It looked like Duran was going to make a fantastic inning saving catch as he tracked a tough fly ball and it went into his glove, and then fell to the ground. Craig pursued a fly ball too aggressively and kicked it away. Lance also kicked away a fly ball, but the piece de resistance, was a ground ball hit between Jeff and Renee. Each of them could have fielded the ball, but instead they chose to stare longingly into each other’s eyes and let the ball go right between them.  15 runs later the inning ended.

Duran is apparently still in search of a bigger cock (to sacrifice). He had two balls land in his glove just to drop to the ground. Thankfully the second time, it was such an easy catch the batter didn’t run, allowing Duran to record the out even after he dropped it. 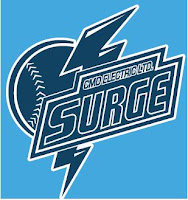 Storm started strong in the top of the 1st inning. After batting through the order without recording an out, Jeff hit a ball to the fence and when he approached second, saw that Dave had firmly planted himself there. He then had to stop and retreat to first. It is unclear whether Storm had already gone to base-to-base, or whether the combination of Brian and Dave didn’t feel like running, but that was pretty much the end of offense for the game. Storm scored almost as many runs in the top of the 1st (12) as both teams combined for the rest of the game (13) on their way to a 19-6 win.While the game was out of reach pretty quickly, there were still some fun moments.

Dave was either feeling sorry for his former team, or was trying to gain some most sportsmanlike player votes. In his second at bat, he flailed at a couple of pitches fouling them off. He either fouled out (to Bob catching for Surge) or struck out depending how you want to score a third strike foul tip to the catcher. In his next at-bat he hit a sharp ground ball to the pitcher and then, instead of running to first, simply allowed Surge to throw to second and first to get the double play.

Storm might have scored some more runs if they had not gone up plus two in the first inning. Bob (who hit a home run in the first that counted) hit two more home runs later in the game for outs.
Defensively there were some fun plays as well. A short fly ball to left field saw Joey going back just to get called off by Bob, who then slid to try to avoid a collision and apparently caught the ball with his stomach.

On a ground ball late in the game, Joey went to field it, but the ball bounced up between his legs. With three balls to choose from, Joey managed to grab the correct one and throw the runner out at first.

In a less successful fielding endeavor, Craig charged hard to make a diving catch in the 6th. He missed the ball, which then went to the fence. The relay came in and Joey threw a very wet ball to home. Dave stretched as far as he could. So far that he might not play ball again this year. He might not even walk again. But he made the catch. Only to have the umpire call the runner safe for an inside the park home run. Only to have the umpire later tell him, that, had it been a close game or a playoff game he would have called the runner out. That’s little consolation to Dave’s groin.