It was the best of times, it was the worst of times. For the second time, Storm jumped out to a lead over the Falcons only to see it slip away. This time, Storm was up 10-5 after the first three innings, and DID NOT SCORE AGAIN to see that lead evaporate and the Falcons come back to win 11-10. In the final inning, Bob led off with a strike out (on foul balls), and Duran got out before the Falcons walked Joey and Al got a hit to give Lance a chance to win the game with a walk-off. Lance hit the ball hard, but just got under it to end the game in fairly dramatic fashion.

This is the second time this has happened. Earlier this season Storm jumped out to an 11-2 lead only to lose to the Falcons. Storm needs to play a full 7 inning against the Falcons instead of a really great first three and mediocre/poor final four.

Of interest: Kenny was a home run shy of the cycle.

Storm over A's in game 1

A Great start to the double-header

In the first game of the Storm’s mixed double-header, things got off to s great start. Storm jumped to an early lead with a seven-run second, and then put the game out of reach with a 10-run 6th.

Duran scored five runs, and Joey drove in 4 to help lead the offense. Duran, Joey and Bob all had home runs.


Stories so far:
The main story thus far has been the weather. Storm (maybe the name is partly to blame) has had a record number of rain-outs (16).

Stories to watch:
Many individual records have the potential to fall this year. The most tenuous record is Joey’s single season triples record of 12. Duran has 9 triples with 18 games to hit three more.

Joey has an excellent chance of breaking the hits record of 117. He is also on track to potentially break the RBI record of 136 and could break the home run record of 31.

Bob has his eye on the runs record of 97 and the doubles record of 27.

Storm worked some two out magic against Greenthumb. In the 4th and 6th innings, Storm scored five runs after two outs were recorded. In the fourth, Storm was able to string together seven consecutive two-out hits, to bring in five runs, and in the sixth, Storm put together four two-out hits including a three-run homer by Lance. Those ten runs ended up being the difference in a tight 20-15 win.

Joey and Al were both clutch throughout the night as they each hit 6 RBI.

The defense was strong, and in the fourth inning, Storm was able to get out of a tough inning with a line-drive double-play. At that moment, the bases were loaded, and had the ball gone through, or had the double-play not been turned, Greenthumb could have added more runs and pulled closer.

Not so highlights:
Todd seemed to be doing something funny to the ball, and frequently Storm batters were unable to square up the ball, including two strikeouts in the 2nd inning.

This game was the perfect way to wrap-up the first half of the season. It was raining, which is pretty much how the year has gone, and Storm played a good game on both sides of the ball.

Storm kept rolling as they played another excellent game on both sides of the ball against Broadway.

The top of the first looked very promising. It started with a bang, as Bob hit an ill-fated solo home run that was the first nail in his barbecue coffin. Storm then scored two on a Joey homer, after Al grounded out the Storm loaded the bases on three consecutive walks, but could not add any extra more runs.

Defensively the game started well. Broadway scored a couple of runs and had a couple on  but an around the horn double-play got Storm out of the inning, and after that they never really looked back.

Storm chipped away scoring one run here, four runs there, with a balanced attack that had the bottom half of the order contributing a lot of the offense, until the floodgates opened in the top of the 6th and Storm scored 10 runs to end any hopes of a Broadway comeback. 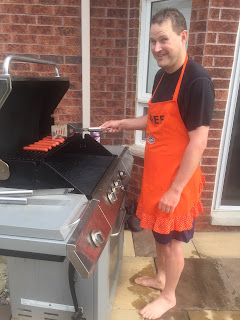 Special notes:
Bob had a pretty good day and yet ended up manning the barbecue afterwards. He hit a home run and two doubles, scored three runs, and drove in two, but the leadoff solo home run put him in the running as chef, and popping out three feet in front of home plate with the bases loaded sealed the deal.

Jeff hit two triples. The first was pretty graceful, but the second ended in a slide that one person commented “looked like he’d been shot by a sniper,” and another remarked that it was, “in the range of a Stottlemyer slide,” to which another player replied, “it wasn’t that bad; he’s not bleeding,” but later said that Jeff had gotten his head stuck under a base, so it was a pretty ugly slide.

Joey only managed two hits, but still was able to record 6 RBI. Kevin got four hits.

Falcon's grounded by the Storm

Storm stormed to an early lead with an eleven run first inning. Lance kindly recorded the first and third outs in the inning helping the Falcons out of a pretty disastrous first. After that, Storm continued to apply putting up multiple runs in all but the sixth inning. The pitching and defense were strong, as the Falcons didn’t even score a run until the fourth inning, and were held to only seven runs all night.


All around Storm hit well as every player recorded multiple hits including seven players with 4 or more hits in the game. (Lance ended with 4 hits FYI)